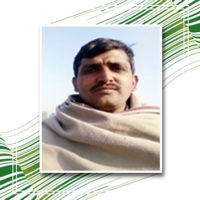 Success story of a trainee who had a problem in differentiation between Insect, pest and disease attack

My name is Haleem Dad Khan, and I am living in a village named 70-D. It is situated in Noor Pur which is the Sub tehsil of the District Pakpattan. I am working with the Engro foods as the supervisor. I am also growing different crops mainly Potato, Rice, and Maize at my Farm. In the start of this potato sowing season, Mr. Waqar approached me, he is accompanied with one of my friend Mr. Shakoor who lived in my neighboring village Sanday Khan. Firstly, he gave me comprehensive introduction of Establishment of Model Farms Project, and told me that he is the focal person and Training Expert of potato in my area. He also shared some success stories of the EMFP’s previous working in the Mango and Orange regions. Furthermore, he also told me about the project goals about enhancing the exports of our agriculture products, he emphasized on that the Punjab Government is now very much interested in boosting up the country’s current exports.

He shared the working method of the EMFP project with me and told me about how the training will be conducted on one of the selected Dera in our village and registered my name in Sanday Khan’s cluster.

First, I thought that this project is also like a pesticide company dealer who had their own benefits while educating the farmers. I feel hesitation while joining his training session. But, after the first meeting which he conducted at our village, it is clear for me that it is entirely a different kind of project and I made up my mind to cooperate with them throughout the whole season. He gave us a comprehensive training about each phase of our potato crop from sowing to harvesting in each different module like sowing, weed control, irrigation management, etc.

However, the most useful modules for me were ” Disease management and Insect Pest Control”. Because before attending these training I cannot differentiate between Insect pest attack or a disease attack on my potato crop and waste a considerable amount of money while consulting with the pesticide dealers.

Now, I am not only able to differentiate among the insect pest attack and a disease attack, instead of controlling them an efficiently.  It is not only increasing my yield but also reduced my production cost. I hope that this project will work in our area in next season also and educate more farmers like me to solve our problems.